Hello, Dear friends♪  I hope you all are having wonderful begging of new year.

I've had a sniffle lately and bit runny nose nagging me but doing fine.
And this is the last of Japanese tradition series;  so would you bear with me, haha.

Hagoita is a kind of racket (wooden paddles) for our one of the traditional New Year pastimes in Japan (or used to be) called hanetsuki; a badminton-like game played by girls with hagoita and a shuttlecock. In olden times, the person who missed had a mark drawn on her face with black ink for calligraphy, p;)
There are symple ones we can use for the play and the ones for the ornaments.  When I was little, my late brother played with me.  I loved the clinking sound when we hit hane (shuttlecook) with hagoita.  Nowadays, I don't see kids playing this game outside, I miss this tradition of ours with kind of nostalgic feeling.


Here is the quote from the pc page,
*A hagoita  is ostensibly used to play hanetsuki, but often instead serving a more ornamental purpose. These are frequently painted, usually with lacquer, with auspicious symbols, or decorated with complex silk collages. This tradition dates to the 17th century, and although the game itself is now rarely played, crafting decorative hagoita is still commonplace.

A hagoita market is held every year from December 17 to 19 on the grounds of the Sensôji temple in Asakusa, a famous shitamachi district in Tôkyô. It's a spectacular event attracting some 300,000 people, who come to buy paddles from the approximately 50 stalls selling nothing but hagoita.   link for these hagoita 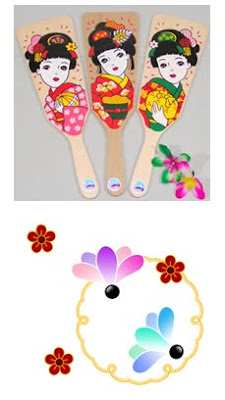