Today is the Upper House election day in Japan and it reminds me of Daruma doll.
Many politicians, at the beginning of an election period, will buy a Daruma doll, paint in one eye, and then, if they win the election, paint in the other eye. At year end, it is customary to take the Daruma doll to a temple, where it is burned in a bonfire.

*quoting from this page*
Daruma is closely associated with a beloved Japanese proverb, Nana korobi yaoki, which states, “Fall down seven times, get up eight”. The Daruma doll's unique rounded shape allows it to return to its original position even if knocked over, representing persistence and never give up your dreams.
Bodhidharma was a Buddhist monk who lived during the 5th/6th century CE. He is traditionally credited as the transmitter of Ch'an (Zen) to China. And said to have done 9 years of zazen (sat facing a wall in meditation for a period without moving) 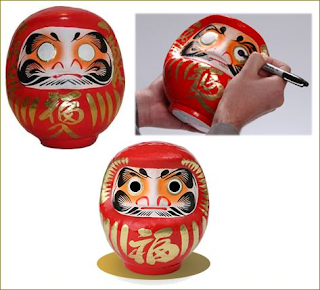 We fills in one eye upon setting the goal, then the other after fulfilling it later. One explanation how this custom started says that in order to motivate Daruma-san to grant your wish, you promise to give him full sight once the goal is accomplished.

Personally, I bought Daruma-san wishing to pass the first grade of the English Proficiency Test after passing Pre-First in my late 20's. Hehe, hasn't accomplished.  Now I wish him to give me more time, friends!!!  Visiting you soon♡♡♡
Posting this to "Our World Tuesday"