Name of the month in Japanese & English

(posted; Etymology page)
Hi, how are you doing, my friends;
In Japan, rainy season has started and it is very important season for the rice crops.


As you can see from this "name of the month" page, we have two types of way calling the name of the month. Commonly, numbers are used like 6 month (6月).  The other traditional one has meaning behind the Chinese Characters and sounds elegant.  June has confusing traditional name for us with the letter "無,without". 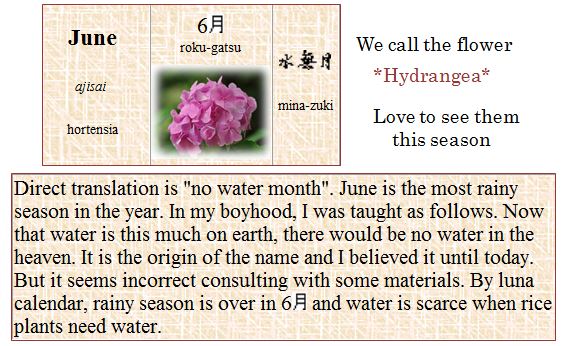 Besides this "new style dates" & "old style dates" theory, it seems there is another one.  Well, let me skip here -:))


I'm pasting from this page, found so interesting especially after September.


Most months are derived from Latin words or from the names of Roman gods and rulers.January, for instance, comes from Janus, the Roman god of doors and of beginnings and endings. Janus had two faces, one that looked forward and another that looked backward. January was named after Janus because the month looks both at the end of the previous year and the beginning of the new one.

February comes from the Latin februare, "to purify." The Latins celebrated the festival of forgiveness for sins on February 15.
March is named after Mars, the Roman god of war.
April is likely named after the Latin aperire, or "to open," signifying the opening of buds in the spring.
May comes from the Roman goddess Maia, a deity associated with fertility.
June comes from the goddess Juno, the chief Roman goddess.
July is named after Julius Ceasar.
August is named for Augustus Ceasar.
The last four months are named after numbers. The original Roman calendar had only ten months and began in what is now March, so the ninth, tenth, eleventh, and twelfth months of our calendar coincided with the seventh, eighth, ninth, and tenth months of the Roman calendar. Septem is Latin for "seven," octo is latin for "eight," novem is Latin for "nine," and decem is Latin for "ten."


Even though I can name the Japanese traditional version,
I only knew some of the traditional meaning.
First to know the meaning behind the English version.
I feel so happy to have the chance to know through posting them to blog♪

ps> So sorry for posting before visiting you! I'll be able to tonight, my friends♡♡♡
I was busy last couple of days and will be for a while tending farther etc.
Also, thanks again for visiting this long post.  Hope to come back soon♬♬♬

Email ThisBlogThis!Share to TwitterShare to FacebookShare to Pinterest
ラベル: Etymology, name of the month