October 31st is our 35th Wedding Anniversary; (bit early post, haha)
I cannot believe this great deal of time has passed!!!  I always felt funny to hear the elder people keep saying "Time Flies" when young.  It sure is ironic that it's my turn to feel it first hand, p;)  Well, my husband doesn't seem to be very happy my posting this picture (you know how Japanese men are, not only? haha,) 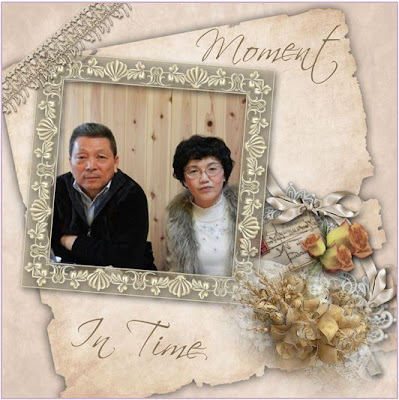 Coming anniversary really makes me recall the days we had.
From this page, I learned that what is the anniversary gift for the set year. And we call the anniversary with special way from these gifts in Japan, ours called for example, "coral wedding (anniversary) 珊瑚婚式, sangokonshiki"
As some of you might remember, we were introduced by mutual acquaintance who happened to live next door with my husband in 1977. Old fashioned arranged marriage and we married only four months later.  He was single living alone at that time. After we met, he called me almost every day p;)

As I knew my hormone disorder due to little malfunction of pituitary gland, I started infertility treatment right after we married (he knew about it in advance). Well, it has been a bit tough several years both mentally and financially. As for mentally, I have to add the busybodies' gossip; whew, it sure last long and I thought later that only if the air-conditioning had been more common at that time, I wouldn't have to hear that much. Mothers group (about 10 years older than me) were joyfully chatting and laughing, which were clearly heard from outside, even from inside of their house while I was walking pass. Haha, young newlyweds suddenly became neighbor must have been an easy target. I was reminded how the woman without children can be seen or treated in society.
I am so grateful for my husband for his understanding; if it were not his support, I wouldn't have been able to get through these period.

Right after I gave up the treatment, I needed something to spend my affluent time and boost my spirit up for both of us. Since I started learning English by enjoying bi-lingual system, I didn't have to spend time with these trivial matter, haha. After I passed the certain level of the government supported proficiency test, I was lucky to be able to teach English at home and have had many students who are all so dear to me. I must admit that time has gone really quickly since I started to engage in teaching when I was 30 years old.
Thank God with my husband's patience and his bank clerk job which required long working hours, I could continue the work till late at night (around 21:30).

Through good times and bad times, you have been always on my side, especially when my family were sick and lost them.  Love you always my sweetheart♡♡♡
I know you don't read this blog, p;)

PS> So sorry for this long post. I will paste this post to my "about me page" and promise not to write this kind of autobiography again, haha.  And my next post won't be so soon, but I'll be fine and see you in your posts, friends♪♪♪

Email ThisBlogThis!Share to TwitterShare to FacebookShare to Pinterest
ラベル: anniversary